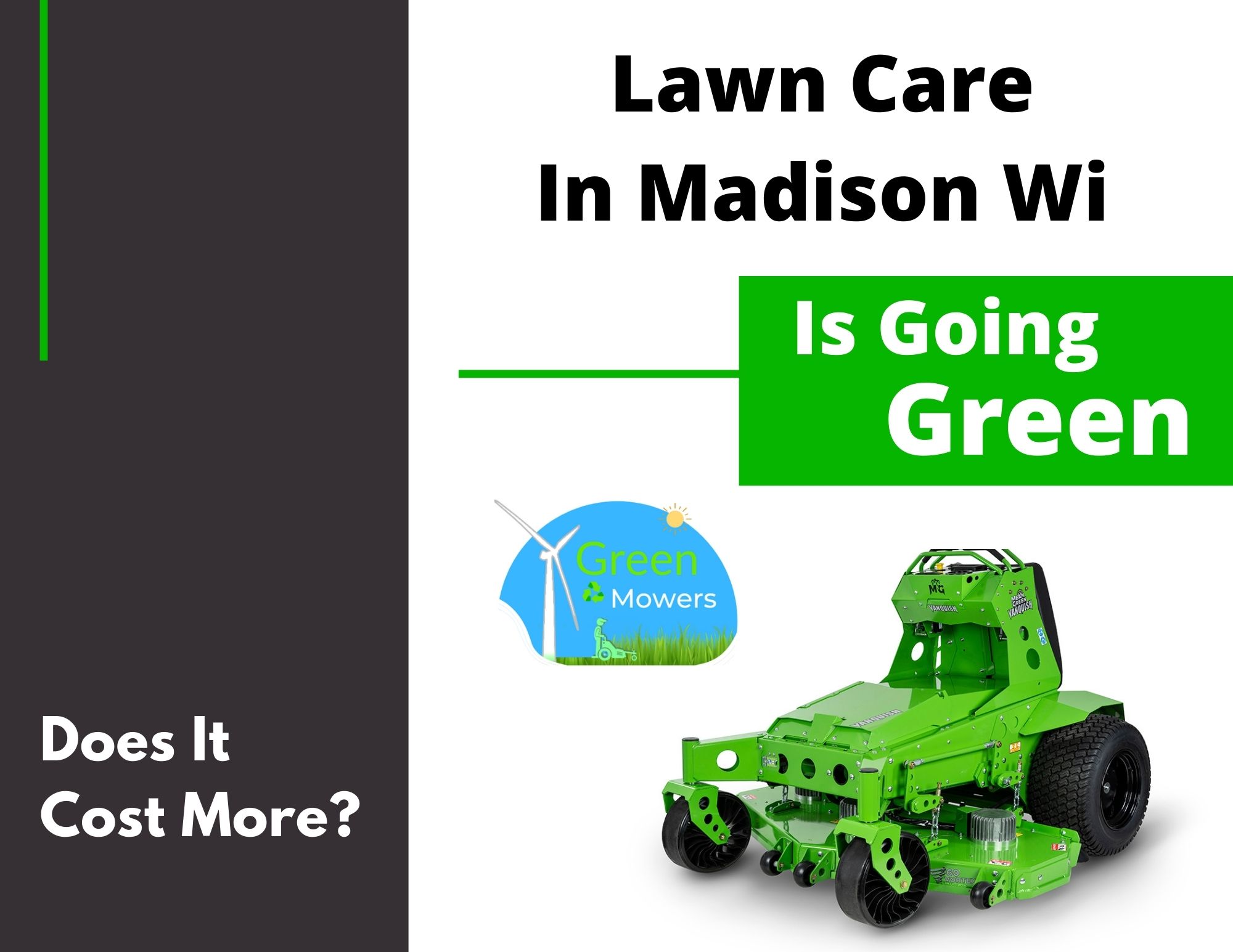 There is a new lawn care mowing service in Madison Wi called Green Mowers. That could reduce the carbon footprint equivalent of "two" million car miles of pollution in their first 2021 season and 4 times that for 2022. With 100% renewable energy thanks to Madison Gas and Electic's Green Power Tomorrow program. There are many services that are eco-friendly now these days. However, few have made a large impact on the reduction of our carbon footprint. Compared to gas-powered commercial lawn care and mowing services, an average 20-minute electric lawn mowing can reduce the amount equivalent to 1,600 car miles of pollution each week. This is because the EPA has very little oversite and few regulations with off-road vehicles.

Here Are The Facts,

According to an EPA study, one 3hp lawn mower emits the same amount of air pollution as 11 cars driving at 55 mph.  Each additional HP is calculated with a linear use equation.

Green Mowers of Madison does have competitive prices for its area of Dane County. There are some eco-friendly lawn care and mowing services that do charge more depending on your area. However, If interested in Green Mowers they do offer online quotes in the link below.

Why Does Commercial Lawn Care Produce So Much Pollution?

Off-road vehicles such as lawnmowers, UTVs, ATVs, and so on put out an extreme amount of pollution with a large impact on our environment. The EPA does very little into regulating emissions on Off-road vehicles including the lawn care industry. Emissions are more than 30 times worse than on-road gas vehicles. Gas-powered outdoor power equipment is also polluting our air. One 2-cycle string trimmer can produce as many emissions in one hour as one full-size truck traveling over 3,000 miles!

The future of the lawn care and mowing industry is electric to keep our air clean for generations to come. That is not the only way lawn care can help our planet. One of the biggest problems with lawn care and architecture is what it is doing to our rivers and lakes. Phosphorus pollution from our lawns fertilizer and leaves can wash directly into our lakes and rivers. It only takes one pound of phosphorus to produce 500 pounds of algae! Green Mowers is one of the very few that only dose overseeding and aerations to help lawns grow without the need for fertilizer. A big step for Madison's blue algae problem infesting the lakes in the midwest.

Madison Wi Has Been Green For Some Time.

The birthplace of earth day Madison holds up its reputation by being ranked as one of the greenest cities in America according to NerdWallet. Lawn care is not the only reason for Madison being eco-friendly.  With over 280 parks Madison Wisconsin has the largest number of parks per capita in the country. The park's combined size is over 6,000 acres which makes up 14% of Madison's landmass. Madison also is home to more bikes than cars and was awarded Platinum Status by the League of American Bicyclists.

The city has a long history of being green. Governor Nelson was the founder of earth day a pioneer in going green. Frank Lloyd Wright was also a pioneer in an organic approach to architecture. The Monona Terrace Convention Center is LEED Gold Certified and the Alliant Energy Center has also earned Travel Green Certification from the Wisconsin Department of Tourism. Madison Gas and Electic offers 100% renewable energy with their Green Power Tomorrow program. Clean energy is sweeping across America with more dramatic growth in years to come.

The future of Madison is looking very good for becoming more and more green as time goes on. As the Madison City Council adopted recommendations that will move the city toward 100 percent renewable energy by 2030 from local leaders to support federal Green New Deal legislation. The proposed plan requires $95 million and will deliver $78 million in savings. There will be a reduction of 426,000 tons of carbon emissions.

Can Green Lawn Care Get the larger Jobs Done?

There are commercial-grade electric lawnmowers that have several optional batteries allowing for cutting times of 7 hours. ZTR technologies make it competitive with any commercial gas mower. That all adds up to 15 acres of mowing per charge. Build with aluminum alloy, less weight means less soil compaction and wear and tear on a lawn. Providing powerful electric replacements for gas that run at close to 90% efficiency.